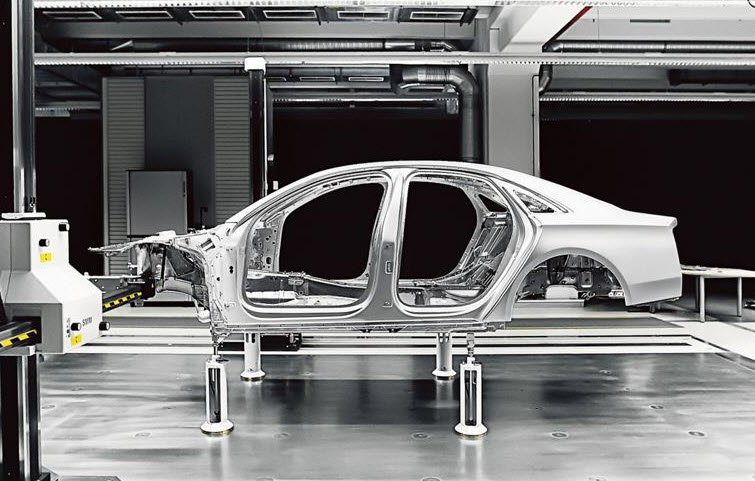 For a sector that is traditionally so closely linked with steel utilisation, it’s perhaps surprising that transport is now the single largest user of aluminium products in Europe - accounting for 40% of the manufacturing industry’s output. As the whole sector undergoes one of the most significant evolutions it’s seen in almost a century, engineers and designers in the automotive industry face a fresh set of challenges and it could be argued that aluminium is already becoming one of their key solutions.

Tangible benefits for our climate

Aluminium’s use in personal and commercial vehicles is accelerating because it offers the fastest, safest, most environmentally friendly and cost-effective way to increase performance, boost fuel economy and reduce emissions while maintaining or improving safety and durability.

Aluminium’s light-weighting properties mean it already makes a substantial contribution to reducing CO2 emissions and improving fuel efficiency. It has enabled cars producers in Europe this year to reduce 50 million tons of unwanted CO2 in vehicle emissions, when measured through their lifetime. Even as a starting point, this represents a meaningful stride towards to reducing the industry’s impact on climate change.

Recognised forward-thinking car manufacturers such as Tesla, Jaguar Land Rover, Audi and BMW, increasingly report that highly-engineered aluminium car parts are as safe and strong as steel, but have the added benefit of being up to 40% lighter. Notable enhancements in performance and agility, improvements in fuel economy and CO2 emissions can be seen across their latest range of models as a result.

The use of aluminium in automotive manufacturing is not a novel concept by any means, but its applications have become much more inventive and widespread, particularly within the growing EV market. The average amount of aluminium used in the manufacturing of an average car has increased from 50 kg in 1990 to around 151kg based on recent estimates, and some experts project that this could rise up to as much as 196 kg by 2025.

Every kilogram of aluminium that replaces steel in the assembly of a new car reduces the overall weight of the vehicle by a further kilogram. Using 100 kg of aluminium in a car reduces CO2 emissions by up to 5 grams per mile travelled, saving up to 46 litres of fuel per year. As more and more electric cars reach the market, this is bound to become even more important as we target net zero. The lighter the vehicle, the longer the range it will achieve on the same charge, making the batteries cheaper to manufacture and offering drivers a range that is comparable with petrol engines.  Aluminium is impressively versatile for use in components that most electric vehicles require, such as cooling solutions, battery frames and cables, which are now are now routinely fabricated from aluminium.

Turning our attention to components that would perhaps usually fly ‘under the radar’ when compared with mechanical technologies, steel has also historically been a popular solution for interior features such as speaker grilles and tread plates due to its low cost and impressive durability characteristics. As light weighting becomes a bigger priority for EV car makers, will aluminium start to become a more prevalent feature within our car’s décor? Aston Martin are great example of a car manufacturer that has already embraced the versatility of aluminium within design; their exterior ventilation grilles are manufactured from expanded aluminium rather than steel, with a specialist protective coating applied to ensure long-term durability.

Aluminium usage in cars is already an excellent example of a circular economy. More than 90% of the metal is recovered after the end of the vehicle’s life-cycle and re-used to create new aluminium products. Each time aluminium is recycled into a new product, it retains its core properties. As a result, this cycle can take place an infinite number of times with little to no change to the inherent properties of the metal. For that reason, there is no difference between virgin and recycled aluminium.

Even at raw material production stage, most aluminium is initially smelted using hydroelectric power, which is a renewable energy resource that doesn’t produce any CO2 emissions. Aluminium is one of the most widely recycled materials and through the recycling process it saves 95% of the energy that it would cost to produce new aluminium.

As specialist suppliers to the automotive industry, Ash & Lacy Automotive operate according to ISO 14001 Environmental Management and IATF 16949:2016 Automotive Quality Management to guarantee the long-term performance of our components whilst simultaneously limiting our impact on the environment. Our advanced manufacturing capabilities and diverse supply chains allow us to recommend and source raw materials based on their perceived performance and technical attributes and ultimately support the increased use of aluminium in car manufacturing now and in the future.

Something else? To arrange a technical consultation, please get in touch with our team of experts – sales@ashlacyautomotive.co.uk

vamtam-theme-circle-post
 Category Thought Leadership
When you’re browsing in a car showroom, it’s hard to deny the appeal of a...
Read More

vamtam-theme-circle-post
 Category Thought Leadership
For the automotive engineer, using a combination of metal and plastic can be hugely advantageous...
Read More

Automotive Coatings – What’s On The Inside Counts TooThe drive towards sustainability is a series of moving parts
We use cookies on our website to give you the most relevant experience by remembering your preferences and repeat visits. By clicking “Accept”, you consent to the use of ALL the cookies. However you may visit Cookie Settings to provide a controlled consent.
Cookie settingsACCEPT
Manage consent

This website uses cookies to improve your experience while you navigate through the website. Out of these cookies, the cookies that are categorized as necessary are stored on your browser as they are essential for the working of basic functionalities of the website. We also use third-party cookies that help us analyze and understand how you use this website. These cookies will be stored in your browser only with your consent. You also have the option to opt-out of these cookies. But opting out of some of these cookies may have an effect on your browsing experience.
Necessary Always Enabled
Necessary cookies are absolutely essential for the website to function properly. These cookies ensure basic functionalities and security features of the website, anonymously.
Functional
Functional cookies help to perform certain functionalities like sharing the content of the website on social media platforms, collect feedbacks, and other third-party features.
Performance
Performance cookies are used to understand and analyze the key performance indexes of the website which helps in delivering a better user experience for the visitors.
Analytics
Analytical cookies are used to understand how visitors interact with the website. These cookies help provide information on metrics the number of visitors, bounce rate, traffic source, etc.
Advertisement
Advertisement cookies are used to provide visitors with relevant ads and marketing campaigns. These cookies track visitors across websites and collect information to provide customized ads.
Others
Other uncategorized cookies are those that are being analyzed and have not been classified into a category as yet.
Save & Accept
Loading Comments...